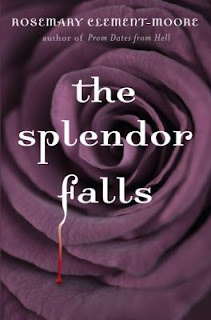 Sylvie, devastated by her leg-breaking career-ender and her father’s death, drinks one too many glasses of champagne at her mother’s wedding and has a very strange hallucination. Believing Sylvie is going crazy, her mother sends her to Sylvie’s father’s ancestral home in Alabama and to the care of her father’s cousin. Here Sylvie meets two very different boys and one very menacing ghost. As she works in her father’s garden and learns about the history of her family and the town, Sylvie wonders if magic is real and if she can find something other than ballet as her life’s passion.

How refreshing to find a maturing, spunky, needs-no-man (although having a boyfriend is welcomed!) heroine in a supernatural book! Sylvie’s snarky attitude, her realistic troubles, and her character growth make her a character to root for. The history and geology behind the possibility of magic roots the supernatural aspect in this well-written, compelling, and fun read.