Outlaw: The Legend of Robin Hood: A Graphic Novel 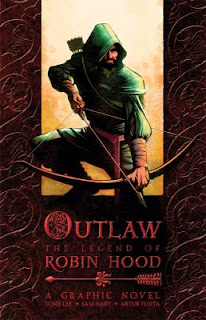 Robin of Loxley, trying to avenge his father’s death, enters the Sherwood Forest to confront John Little who Lord Murdach claimed was his father’s killer. After fighting John, Robin learns the true identity of the killer and joins up with the John Little’s crew to take on Lord Murdach.

I have not read many graphic novels, but I had read so many good things about this book in review journals that I decided to pick it up. I was not disappointed. Even though one might be familiar with the legend of Robin Hood, the author brings out new angles of the legend. There is some mild language, but I would recommend it to teens and adults.

I thought this one was a lot of fun! I've always liked the story of Robin Hood, and I enjoyed this version with its modern language. I did have a little trouble at first distinguishing between the Sheriff of Nottingham and Guy of Gisborne, but still, it was a fun read.