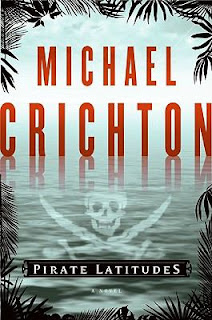 Pirate Latitudes takes readers on a dangerous adventure with Captain Edward Hunter from Port Royal to the Spanish outpost of Matanceros and back again. Hunter and his cunning and vicious crew set out to capture a treasure galleon that could potentially make them all extremely wealthy. Their plan to penetrate the island’s enforcements is a long shot to begin with, and when things start going wrong from the first hoisting of the anchor, their chances of survival, let alone success, are unlikely.

If you are looking for a fast paced pirate adventure, this is the book for you. Don’t look for too much character depth or development, but Crichton makes up for it with a great story that kept me entirely engaged. The historical details describing 17th Century Jamaica were really interesting and enforce my appreciation for the 21st Century.