Jake Fisher meets Natalie when they are both attending artistic/scholarly retreats during a summer in Vermont. They fall madly in love, but at the end of the summer Natalie suddenly dumps Jake and marries another man. Jake is devastated--and confused.  He knows the feelings were reciprocal, but he promises Natalie he will leave the new couple alone. Six years later when he sees and obituary for Natalie's husband he attends the funeral, only to discover that Todd's grieving wife is not Natalie, and that everyone he talks to about her either can't remember her, pretends she doesn't exist, or doesn't have any idea where she might be. Because Jake can't let things alone, he is kidnapped, beaten, shot at, and threatened within an inch of his and Natalie's lives. But he can't leave things lay, so he eventually finds himself cornered by an international secret organization, a local and very frightening version of the mafiosa, and his own lost love.  Six Years is a quick and gripping read, hard to put down before all the puzzle pieces are finally slotted into place.  It is also plagued here and there by inconsistencies and illogical elements.  For instance, if you were going to take a 6'5" man hostage, would you really be able to grab him around the neck and put a gun to his head?  would you have to stand on a picnic table to do it, or jump up and down?  Also, Jake's feelings for his one true love are sometimes extra-mushy in their expression. Still, Six Years is sitting comfortably atop the New York Times bestseller list and it is a ripsnorter if you need a couple of hours away from your real life, for whatever reason.

Waterspouts in the Old World, with a few forays onto land, provide the earliest accounts of tornadic activity.  In the New World, the first tornado was sighted near Cambridge, Massachusetts by a farmer named Samuel Stone who passed the information along to Puritan preacher Increase Mather who saved the account in his collection of Illustrious Providences, later read by Benjamin Franklin who was also much interested in meteorological activity. Correspondence with European scientists (i.e., natural philosophers) ensued and theories began to emerge as to the nature of cyclonic storms.  Early practitioners believed the storms were caused by electricity in the air. James Espy, an amateur meterologist, concluded that the storms arose because of a pressure and temperature differentials between the lower and upper atmospheres but refused to believe the storms twisted or spun, though damage patterns on the ground clearly revealed the cyclonic movement. The greatest tornado expert of the nineteenth and twentieth centuries was James Park Finley who served with the Army Signal Corps and relentlessly visited storm sites, studied pre-storm atmospheric conditions, and published a book which became the starting point for much of future research and knowledge about tornadoes.  But because he was not an academic, he and his ideas were marginalized and wrongheadedness prevailed.  For instance, the military refused to share its tornado forecasts with the general public for fear of inspiring panic.  Sandlin also describes in often horrifying detail the terrible tornado strikes that impelled action by the military and the government:  the Peshtigo fire tornado which burned the silicates out of the soil and rained them down as glass, the Tri-States tornado with a damage track of 219 miles, and the Great Tornado Outbreaks of 1974, 1999, and 2011. Thousands of lives were lost with property damage in the billions. Lee Sandlin is a deeply engaging prose stylist and his book reads better than a novel in many respects.  Notes are appended but, alas, no index.

The Uses of Adversity

LDS readers could scarcely find a better text about the place of suffering in mortality, nor better intellectual as well as spiritual resources for dealing with adversity. Dr. Broderick, with degrees from Harvard and Cornell, was a professor of sociology and the head of the marriage and family therapy program at USC, and a past president of the Association of Mormon Counselors and Psychotherapists before he passed away in 1999.  His book is painful, beautiful, and  funny.  With self-deprecating humor he describes his own attempts as a professional counselor and stake president to help others come to terms with the griefs and injustices of life. He neither hides behind the notion that bad things are good for us if we have the proper perspective, nor that pain, injustice, and loss are necessarily ennobling. ". . . I do not want you to think that I believe anything good about pain," he says. "I hate pain.  I hate injustice.  I hate loss.  I hate all the things we all hate. . . .  I want to discuss how to encounter that pain in such a way that it does not destroy you, how to find profit in that awful and unrewarding experience."  Dr. Broderick is fierce in his caring about those in trouble, and as fiercely filled with faith about the help that he believes is available to all.  The Uses of Adversity is a thoughtful, memorable book, addressing questions it would be insulting to try to answer too glibly.

Neryn is the only member of her family left, in a land ruled by an oppressive king. He has ordered anyone with magical powers to be brought to him and Neryn has known from a young age that she has always had an ability to communicate with the Fey-like creatures that live in Alban. Her only hope is to try to make it to Shadowfell, a rebel camp, that is rumored to be located deep in the mountains.  Along the way she comes in contact with a man named Flint, but in a land ruled by fear she is not sure if it is possible to trust him even if it might mean her survival.

Juliet Marillier is a wonderful storyteller and I really enjoyed this book. The plot moves very slowly, but I still found myself staying up late to finish. This is the first book in a planned trilogy and I look forward to discovering what comes next for Neryn as she begins to discover her true destiny.


Serena, a young, gorgeous MI-5 employee with a Cambridge maths degree, is recruited for operation ‘sweet tooth’: a secret pro-capitalist propaganda operation. Still just a woman in 1970’s England, Serena’s only part in this mission is ensuring that T. H. Haley, a young writer, accepts the government funding and agrees to write a novel. It turns out that Serena and Haley have an undeniable attraction for each other, and their affair quickly grows complicated under the layers of lying and deceit.

Though this book was widely proclaimed as one of the ‘best reads of 2012’, it really didn’t grow on me until the final few pages. It’s technically a spy novel, but the spying is too guilt-ridden and subtle to make up for the plot’s plodding pace. The ending is one of those respectable, intellectual, surprising ones that changes your whole perspective on the book. While this sort of ending is excellent in its own way, it does mean that most of the enjoyment comes not from the actual reading experience, but instead from reflecting on the book after it is already over. A worthwhile novel for patient readers.

Jack (for the moment, and with shifting last names) is a bad, bad man, but more along the lines of an anti-hero rather than a truly evil man.  He has robbed banks, armored cars, and pretty much anything with money in it.  He doesn't like to kill people unless he has to, but "it's not as bad as you might think." But Jack's specialty is as a ghostman, someone who cleans up messes, makes people disappear who need to disappear, is off-the-grid invisible himself and helps others take it on the lam as well.  Marcus Hayes, on the other hand, is truly wicked and as our story begins, asks Jack to clean up a major mess made when two of his men rob an armored car at a casino entrance, are ambushed, but make it away with  the loot . . . and a federal payload timed to explode in 48 hours. On the other side of this scary equation is The Wolf, an even worse guy than Marcus, who is also after the money which was taken in his territory. How Jack plays both sides against each other, and also manages to save his own miserable hide,  is the thread of this richly entertaining, breakneck, intellectual thriller.  This book is a sweet, fast ride through a very violent theme park.  Beware.

Bill Streever is not a spotlight-seeking man. He is so reticent, in fact, that his jacket photo doesn't show his face. But he is not shy about burning his hand in a candle flame, or firewalking for 15 feet, or stirring around in a lava flow with a carpenter's hammer, all in pursuit of an encyclopedic variety of experiences with heat. Following (logically) his previous bestseller (Cold:  Adventures in the World's Frozen Places), Streever travels from Death Valley to the peat bogs of the Netherlands to the defunct oil fields of Pennsylvania, considering the nature of heat and its sources. The sun itself comes into play here, as does the Brookfield supercollider, and Mauna Loa, earth's largest volcano. My favorite story is of the refinery worker who named his son Carbon Dubbs.  Carbon, second-generation refinery worker, was so besotted with oil production that he gave himself the middle name of Petroleum and named his daughters Methyl and Ethyl. It doesn't get better than that. Nor do information books get much better than this one. 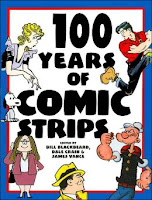 Originally published in 1994 as two books, 100 Years of  Comic Strips doesn't have any brand new comic strips in it, but it does have a wealth of old ones.  So if you are of an age to have read and enjoyed Pogo, Krazy Kat, Little Orphan Annie, Buck Rogers, and L'il Abner this is a great book.  With nostalgia comes American history, of course, which includes considerable insensitivity to blacks and Asians.  This book will make you glad we have grown up some.  It will also make you glad for the comics, for all the laughs and the mysteries (who is Mary Worth, anyway?  and who cares?).  Or Terry and the Pirates.  Does anyone know what was going on there?  Or who knew that Dr. Seuss did a syndicated comic strip called Hejji?  Some fun. And one of the best access points of all to American (popular) history.