The reader is lead through a four course meal by the decidedly unreliable narrator, Mr. Lohman, as he negotiates a ‘small’ family problem with his brother. As Mr. Lohman captures the reader’s trust with sly jabs at the upper-class and witty complaints, he slowly reveals his own history and the real trouble in his family. The narrator tries to uncover only what he wants his readers to see, but it becomes impossible to keep ignoring the strange contradictions in his story. What the reader glimpses through the cracks is both thrilling and disturbing.

Hailed as the ‘European Gone Girl’, the Dinner doesn’t disappoint. Most thrillers capture the reader’s attention through fast-paced, action packed plotlines with young, glamorous protagonists and clearly defined villains. Not so here. The Dinner thrills because of its masterful storytelling, which slowly and creepily reveals the hero and the villain to be the same person. This is the sort of book that worms its way into your subconscious, so a small part of you will always think: people can justify anything to themselves.

When 82-year old Sheldon Horowitz finds himself an uneasy transplant to Norway, living with his granddaughter and her new husband, he doesn't have much time to reflect on his situation before he is thrust into the role of protector of a young boy from the upstairs apartment whose mother has been murdered practically in front of his eyes. Leaving his granddaughter a cryptic note about "lighting out for the territories," Sheldon and the young boy must avoid the killers, one of whom is the boy's father, and the police who may unwittingly hand the boy over to his dad. Multiple perspectives show the two heading directly into danger when they think they will soon be safe. Even more engaging than the suspense of the story, though, is Sheldon's mental and emotional journey as he simultaneously travels through his past with his deceased wife, a friend from next door who has passed away, and most importantly, with his son who was killed in Vietnam. Rich in philosophy, love, regret, and hope, Norwegian by Night is not just one of the best mysteries of 2013, but one of the best books.

The World Until Yesterday

The World Until Yesterday: What Can We Learn From Traditional Societies?
By Jared Diamond
Viking, 2012. 499 pgs. Nonfiction

In his previous bestsellers (Guns, Germs, and Steel and Collapse), Jared Diamond has discussed his theories on why some cultures modernized more quickly than others. In The World Until Yesterday he takes a much more personal tone, describing what he has learned from those people of the world who have remained untouched by the rise of modern societies.

Having spent decades living with and studying traditional cultures in places like Papua New Guinea, the Amazon, and Kalahari, Diamond has vast catalog of personal experiences to draw upon. He provides descriptions of how these primitive peoples deal with each other, strangers, conflict, child-rearing, the elderly, danger, religion, language, health, and death. I have truly enjoyed Jared Diamond’s previous works and I enjoyed a great deal of this one. The first-hand accounts were by far the best parts and overshadowed some of the more dry portions of the book.

Elizabeth Keckley was born a slave, but thanks to her skills as a dressmaker she was able to purchase her freedom. Eventually she worked her way to Washington D.C. and becomes one of the most sought after ‘modistes’ in the city. After Lincoln’s election, Elizabeth was hired by First Lady Mary Todd Lincoln. The two women began their relationship on a professional level, but Mrs. Lincoln comes to rely heavily on Elizabeth’s calming influence and steady support as she navigates the trials of being the First Lady during a civil war, grieves over the loss of her son,and later as she survives the horrors of her husband’s assassination.

In Mrs. Lincoln’s Dressmaker, Jennifer Chiaverini gives us what the best historical fiction should, a new perspective on familiar history. Elizabeth’s intimate access to the First Family provides a very personal and female version for the American Civil War. This is a standout addition to the vast amount of literature dealing with the Lincolns.

The Golem and the Jinni

The Golem and the Jinni
by Helene Wecker
HarperCollins, 2013.  486 pgs. Fantasy

In this remarkably accomplished first volume, Helene Wecker brings to bright life two mythical characters in turn of the century New York.  Chava the golem was created as wife to a man emigrating from Poland to the United States, who dies just after he awakens her.  She arrives in New York alone and totally lost until a rabbi sees her nature and lets her into his home.  Ahmad, the jinni, has been imprisoned in a copper jar and is accidentally released from the bottle but not from his unknown master by a Syrian tinsmith who takes him on as an apprentice.  The apprentice soon outstrips the master and the golem works in a bakery where she has to conceal her extraordinary strength and speed.  Chava and Ahmad meet.  She sees a man with a face of flame, and he sees that she is made of clay.  Against all odds they become friends, and wander the streets of New York together during the night when neither has need of sleep.  The city reveals itself to them, as do the immigrant populations they move among as carefully as they can. A terrifying menace from the old country threatens them both, as do their own differences and abilities. Not much more can be said without ruining this touching and terrifying story, but trust me that you will fly through the book wishing it would not end while desperately needing to know the ending.

Joe DeMarco is a smart guy, a Washington lawyer who can't get a job because his father was a mobster. But the Speaker of the House sees his skills and hires  him as a go-to guy, a man who can solve problems outside the normal protocols and processes of the nation's capital. In his first case, Joe is asked to investigate an assassination attempt on the president himself in which the president is wounded and his best friend killed. A local yokel is found dead, an apparent suicide who left a note claiming responsibility, but Speaker Mahoney's friend Andy Banks, head of Homeland Security, received a warning note from a Secret Service agent before the attempt on the president's life and thinks there is more going on here than a crackpot on a ridge across the Potomac. Joe leans on this guy, follows that guy, but needs help as he quickly gets in over his head and is lucky that one of his friends is an extraordinarily resourceful woman recently retired from an ultra-secret federal agency. Violent, profane, but compulsively readable, The Inside Ring is a great beach book, just as the beach book season begins.

This sequel to Grave Mercy follows Sybella, another daughter of Death himself,  as she is assigned to the D'Albret household in fifteenth-century Brittany. She must be careful of everything she says and does in a place ruled by fear and brutality. She thinks she might go mad until she discovers an unexpected ally imprisoned in the dungeons. As she struggles to help the Duchess of Brittany and to stop D'Albret she discovers that there may be more to life than vengeance.

I have to be honest and say that I did not enjoy this sequel as much as I enjoyed Grave Mercy. I did like that a couple of the characters from the first book make an appearance but this is really a book about Sybella. She is a very troubled character who has experienced unspeakable things in her life. The majority of the book focuses on the inner turmoil she must face instead of the historical events of the time. This books deals with murder, seduction, incest, and the killing of innocent people. I would recommend this only to older teens and adults who have already read the first book. 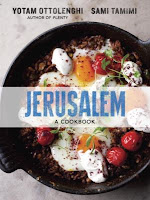 Yotem Ottolenghi interweaves traditional recipes from all quarters of Jerusalem with personal stories and fascinating information about the city. Essential for a modern cookbook, Jerusalem includes gorgeous matte photographs of the food set in traditional cookery, and of the city itself. Readers will find familiar, yet perfected, recipes for falafel and hummus and more surprising suggestions for insane things to do with ground lamb and dried chickpeas. In fact, all of Ottolenghi’s cookbooks are wonderful, and you can always spot them by their characteristic pillowy covers.

I am, self-admittedly, a cookbook snob. I prefer my cookbooks to be like my literature: philosophic with sparse, evocative language and thin on plot. If this doesn’t sound like any cookbook you’ve looked at, it's probably because you’ve never read one cover-to-cover: a habit I highly recommend. A cookbook with a lot of theory and back-story not only provides better reading, but also fits nicely into my daily cooking by providing ideas and structures rather than one-off gourmet recipes. Jerusalem is an excellent example of a readable, practical cookbook.

2312 is a science fiction epic set just before the year 2312, when all the people who could afford it have left earth and populated each planet in the solar system. Mars is a snobby upper-class planet, Mercury an artistic haven, and Venus a large work camp. Humanity travels space on beautiful asteroids hollowed out and terraformed to resemble anything at all. The plot, such as it is, centers around a small group of ‘spacers’ trying to fix earth’s environmental and political issues in the hope that it will stop holding back the human race. It is a sublimely beautiful and entirely strange work of science fiction that envisions a future where art and science are seamlessly intertwined.

2312 is a difficult read, technically classified as ‘hard sci-fi’, so it is terribly important to evaluate how much time and effort you are willing to put into the book before picking it up. Not only is the book difficult, but it is also incredibly, almost unjustifiably, weird. Yet, for all of its faults, I finished this slow, strange, beautiful book in under a week, while I’ve left many a perfectly good, normal book unfinished or un-started. What held on to my imagination here was the complete originality of the world: you’ve never read science fiction like this before.

I’ve had a hard time figuring out who to recommend this book to, and I’ve decided I’d only do it if someone came up to me and said: “I’m sick of everything I’ve ever read or thought about, I want something new”. If that statement fits your reading state of mind, you might want to give Kim Stanley Robinson a try.