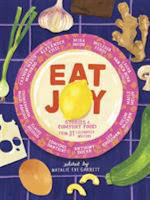 Growing pains, loss, healing, homecoming—food can play a major role in each phase of our journey through life. Food can be full of memories, can help us cope with the loss of a parent, heartache, and loneliness. In this collection of short stories, beloved authors and writers share their experiences (and recipes!) of food and how it helped them through difficult times in life.

This is a great read for anyone that has a special emotional connection to food. The book is split into four parts—growing pains, loss, healing, and homecoming—and each short story focuses on those themes. The stories are autobiographical, and are short enough to be easily digestible for when you just have a few minutes to sneak some reading in. My favorite part is the inclusion of recipes at the end of each story. Lev Grossman’s after-divorce General Tso’s Tofu is as delightfully delicious as his story is painfully hilarious. And Chantel Acevedo’s nostalgic story about her abuela’s merenquitos will fill you with longing for a quiet moment with a sweet treat.

Kings of the Wyld

In one of the most unique recent twists on the adventuring fantasy genre, Kings of the Wyld follows a band of adventurers who have retired from the hero life. Clay "Slow-hand" Cooper has retired to a tiny village and works as a guard to support his wife and daughter. Then one of Clay's former band companions, Gabe, shows up asking for help with an impossible task--to infiltrate a city besieged by an army of monsters to save his daughter Rose. What ensues is an amazing adventure of washed out heroes completing impossible task after impossible task, losing limbs, saving the known world, and finding the cure of an incurable disease, all while they begrudgingly deal with the fact that they aren't as young as they used to be. If anything, Clay learns that being a hero is more about the friends you have, not being afraid to take risks, and a whole lot of luck.

Eames injects a huge dose of humor into his absurdist fantasy story (a la Terry Pratchet) while grounding it in a very relatable situation--a father doing everthing he can to save his daughter. For readers who liked The Lies of Locke Lamora by Scott Lynch and Terry Pratchett's Discworld, this book is a must read.

Elwood Curtis is a black, straight-A student who lives in Harlem in the 1960s and loves the words of Dr. Martin Luther King Jr. When an innocent mistake sentences Elwood to the Nickel Academy, a Florida reform school, he quickly learns to rely on a fellow inmate named Turner to learn how to survive in this new environment. It turns out the Nickel Academy isn’t a reform school; it’s a den of horrors, where the staff beat and abuse the students, corrupt officials steal food and supplies, and any boy who resists is likely to never be heard from again. This is the story of how Elwood and Turner learn to cope with their experience in the Nickel Academy, and how it affects the rest of their lives.

The Nickel Boys is a devastating work of fiction that was hard to read at times, but I couldn’t put it down. Part of this is because of the book’s roots in actual history (the Nickel Academy is based on a real school in Florida called the Dozier School for Boys), and part of it is because the characters are incredibly complex and you can’t help but root for them. Elwood has such pure motives, and he always tries to believe the best of people, but time and time again he is disappointed. Turner is much more cynical, and it’s his real-talk that helps Elwood learn to survive in a horrible place, while Elwood’s hopeful spirit possibly allows Turner to move on from the horrors of the Academy once he leaves.

Colson Whitehead recently became the fourth person in history to earn not one, but two Pulitzer Prizes, the second being for this book. This accomplishment is very well earned. This is an important book that’s not to be missed.

Not If I Save You First

Not If I Save You First
By Ally Carter
Scholastic Press, 2018. 293 pages. Young Adult

Maddie Manchester thought she and Logan would be friends forever. But when your dad is a Secret Service agent and your best friend is the president's son, sometimes life has other plans. After her father was wounded in an attempted kidnapping, the pair moved to a cabin in the middle of the Alaskan wilderness with no phone and no Internet. And not a single word from Logan. Maddie tells herself it's okay and starts to move on, until Logan shows up six years later... and Maddie wants to kill him. But before that can happen, an assailant appears out of nowhere, knocking Maddie off a cliff and dragging Logan to some unknown fate. Maddie knows she could turn back and get help. But the weather is turning, and the terrain will only get more treacherous, the animals more deadly. Maddie still really wants to kill Logan. But she has to save him first.

In some novels for young adults, the romantic elements feel clunky and artificial. But this winner of the 2020 Beehive Book Award certainly is not one of them. The chemistry between Maddie and Logan is believable (teen awkwardness and all), and it helps to lighten up this complex story of loss and revenge. As they begin to heal old wounds, the two friends find real, healthy connection. Beyond the romance, Carter strikes a careful balance of action and angst. Get ready for a fun, quick-paced thriller with a witty, capable heroine and some dark twists.

Call the Midwife: A Memoir of Birth, Joy, and Hard Times

Call the Midwife: A Memoir of Birth, Joy, and Hard Times
by Jennifer Worth
Penguin Group USA, 2012. 340 pgs. Biography

Young Jenny is a trained nurse who unknowingly chooses a convent to complete her midwifery training in the 1950s. In the slums of the East End of London, Jenny trains with the Sisters, delivering babies in all sorts of conditions at all times of day or night. She learns to respect the Sisters and not to judge the poor she serves so quickly. Join in her journey as she meets a colorful cast of women from all walks of life from the warm-hearted nuns, to a young girl caught in prostitution, to a woman who doesn’t speak English and is pregnant with her 24th child.

This biography is also a social history of living conditions during post-war slums of London, especially concerning childbirth. It’s written in a narrative style, with each chapter focusing on a different patient. I listened to it and I enjoyed the narration, so the audiobook gets a thumbs up from me! Anyone interested in medical history, social history, midwifery, post-war England, or the television series Call the Midwife would enjoy this book.