Sadie is used to taking care of things herself. Even before their mom left, Sadie was more a mother than a sister to Mattie. She never minded despite the sacrifice; Mattie has been her whole world since she was born. And that world is shattered when Mattie is found murdered. Months later, the case already gone cold, Sadie decides to take care of things again. Like always.

West McCray remembers hearing about Mattie's murder while traveling doing research for his radio show. To his surprise, nearly a year later he's contacted by a family friend of Sadie and Mattie, pleading for help. For Sadie. She's been missing for months, her car apparently abandoned. Reluctant at first, West soon becomes obsessed with finding Sadie, starting a new podcast to track his investigation of Sadie's journey, desperate to find her before it's too late.

Read this book. Just do it. Better yet, listen to the audiobook, which makes the podcast chapters (West's perspective) really come to life! There's theme music, and sound effects like sound quality of recorded phone calls and crickets chirping in the background of an outdoor, nighttime interview. Alternating between West's chapters/podcast and Sadie's perspective, this story is a brilliant melding of grief, hardship, mystery, and thriller. Sadie is a wonderfully developed protagonist, and really so is every other character. I've never heard/read anything quite like this before. This story feels so real; as a podcast and true crime fan myself, this book felt exactly like listening to podcasts like Serial. SADIE is masterful storytelling done in such a clever and compelling way.  I can't stop thinking or talking about this book! Fellow podcast fans, particularly my fellow true crime fans, will eat this up. 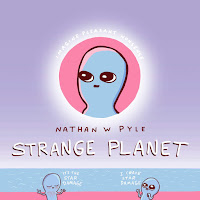 Based on the popular Instagram, Strange Planet, Pyle has published many of his most popular comics, and some that have never been seen, into this adorable and hilarious collection. On a planet not wholly unlike our own, these strange beings live out their lives in short and often hilarious vignettes about family, life, pets, and work among others.

These simple comics in pink, blue, green, and purple are so sweet and enjoyable that it’s hard to put down. Something as simple as telling a child “sweet dreams” has become “imagine pleasant nonsense,” and playing pick-a-boo becomes a game of “have I ceased to exist? Deception! I have not!” Whether the beings are watching a sports game (“catch the orb!”) or celebrating a birthday (emergence day) these wholesome and creatively interpreted comics based on real life situations will bring a smile to your face.

In her third memoir, Untamed, Glennon Doyle discusses what it is like to go from tamed and small, to untamed and free to be herself. With topics ranging from raising children, becoming disenchanted with Christianity, falling in love, and being confronted with her own racial privilege, Doyle explores the many kinds of social conditioning that women go through in their lives. Though her life has changed drastically since her first memoir, Carry On, Warrior, Doyle’s open and insightful style of writing hasn’t.

I have been a fan of Doyle’s for many years, and have really enjoyed reading her three memoirs. She is brutally honest and yet intensely empathetic in her discussion of what she sees as the shortcomings of society and the world in general. And in true Glennon-style, she does not exempt herself from these critiques. I think the biggest take-away from the latest installment is that we may not know that the life we have been socialized to accept is not the only option that we have. Doyle shows great courage in outlining her new life and new truths in this complex and inspiring read.

Gene is an artist and understands stories, so when he hears about the boys’ varsity basketball team at the high school where he teaches, he knows that this is his next story to tell. But, he doesn’t know anything about basketball. The varsity team, the Dragons, is having a phenomenal season that is decades in the making. Each win brings them closer to the California State Championships, but as Gene gets to know the individual players, he realizes that their stories are just as thrilling as any comic book. He knows that he must follow this story to its end, but he doesn’t realize that it will change the lives of Dragons and his own.

This comic book was as exciting, exhilarating, and hopeful as any adventure or superhero comic. There were funny, laugh-out-loud moments, especially from Yang’s wife. I felt a deep connection to a number of the players, and appreciated that Yang provided stories for most of the varsity players, not just the stars, as well as controversial topics regarding the team. The illustrations are colorful, fun, and give life to the story of the Dragons. While I personally enjoy basketball stories, this would be a great read for anyone who enjoys stories about overcoming adversity, sports, or graphic nonfiction. 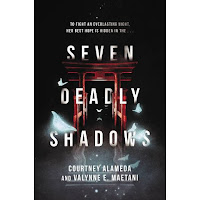 Kira Fujikawa is not your typical High School student living in Kyoto. She is a shrine maiden who can see yokai, the ghosts and demons that haunt the streets of Japan. Her life turns upside down when she learns that Shuten-doji, the demon king, will rise at the next blood moon and bring darkness to the world. Needing help to find the monsters, she enlists seven powerful death gods to aid her.

This is a fun and clean YA fantasy book that reads almost like a manga or anime. The story is fast paced and engaging, capturing the reader's attention and keeping it through the whole book. Kira is a strong and brave female protagonist but can also be unsure of herself, especially as she faces problems beyond her talents and knowledge. Luckily she has a variety of death gods to help her through the biggest threat she has ever known and as she learns from them she slowly gains more confidence in herself.

This fictionalized version of the true life story of Martha Hughes Cannon shows just what an impressive and talented person the first female state senator was. She was a trained orator, she was a doctor, she ran a nursing training school, she promoted the suffragist cause, and as a politician, she devoted herself to improving the public health systems throughout the fledgling state of Utah.

After reading this novel, I really wish I could sit down and have a one-on-one conversation with this fascinating woman. Monson paints Cannon as a woman who struggled with frustrations and doubts, but she didn’t let her limitations stop her from speaking out for women and the impoverished, even when those who had authority didn’t agree with her views. I was left wanting to know more about the life of Martha Hughes Cannon, but the glimpse I got gave interesting insights into what it was really like to live in Utah around the turn of the 20th century. I'm grateful that pioneers like Martha Hughes Cannon helped blaze the trail to help make Utah what it is today.

More Than Words Can Say

Abigail Kemp is determined to not lose her family’s bakery. The city council tells her that she must have a man’s name on her deed or she will have to close down, so she decides she’ll have to ask a man to marry her but convince him that she still gets to run the bakery the way she wants. Zach has had a rough past but is trying his best to do what is right and has no intention of getting married and settling down. He is shocked when Abigail proposes to him but he can’t resist a damsel in distress.

This book was so much fun to read. Abigail doesn’t think much of herself and can’t believe that anyone would be attracted to her because she is plump and plain. Zach is rough around the edges and puts on a tough front but he has a heart of gold. I loved watching their relationship grow. Karen Witemeyer is a great author. She has great historical details, perfect romances and lots of laugh-out-loud moments. She also has just the right amount of religion so that it doesn’t feel overbearing.

Brook Eden has never known where she really fits in. She was raised by an opera singer in Monaco and many people think her the illegitimate daughter of the Prince. As she gets older she decides to find the truth. Justin, a long-time English friend, agrees to help her search for answers. It soon appears that she may be the lost daughter of an Englishman and heiress to a fortune. Brooke goes to England to meet a family she has never known. Everything seems to be falling into place. Soon some disturbing stories begin to surface and Brooke is in a race to find out why her real mother was killed as she was fleeing for her life on a dark and stormy night before Brook's life is threatened too.

This novel has a little bit of everything: romance, mystery, adventure, and religion. Brooke is a strong heroine who doesn't sit back and wait for life to happen. She knows how to shoot a gun, drive a car, and break unbreakable horses which are all things that women of her time shouldn't do. Justin is more thoughtful and cautious. They help to balance each other out when they aren't driving each other crazy. I liked that this historical fiction novel had a layer of mystery to carry the story along. This novel would be good for fans of Sarah Eden or Julianne Donaldson.

Our universe was formed 13.8 billion years ago. As the unorganized soup of particles cooled after the Big Bang, the elements were born. James recounts the history of the elements, from the ancient Greeks to the contemporary scientists who have created new elements in labs to complete the table.

This light-hearted book is nothing like the boring chemistry class you slept through in high school. Telling the story of the elements, James uses facts to answer questions like:
I'm a big nerd, even by librarian standards. Before beginning my career as a librarian, I studied chemistry and even earned a BS in Chemistry. So, of course a new book about chemistry would pique my interest. But this one isn't just for people who get excited about chelation, dimers, and coordination complexes. (Don't judge me.)

I found this to be a refreshing history and outline of chemistry, covering a broad range of topics in a fun and interesting way. Unlike other books about hard science, Elemental is very accessible and doesn't get weighed down with confusing jargon or mathematical details. Without reservation, this is the most delightful book I've read about chemistry in several years. Even if you have zero background in science, this book will make for an entertaining exploration of the building blocks of the universe, without even leaving your home.