What better way to end Beach Reading Season than with steampunk and werewolves Out West.  First book in Monk's The Age of Steam series, Dead Iron begins the story of Cedar Hunt, a handsome and intelligent fellow who once enjoyed a university career with his family, a wife and daughter and beloved brother Wil. But those days are gone and Cedar labors under a curse which makes him a wolf at the full moon, a day before and after. Master of 'matics, Shard LaFel, whose supernatural origins are cleverly concealed behind the veneer of a railroad man, determines all kinds of wickedness against the people of Hallelujah, Oregon, but poses as their progressive friend until almost all is lost.  Cedar, the not-quite widow Lindson and her not-quite-dead husband Jeb, and the mysterious Madder brothers must all stand against the fell Lafel and The Strange or not just Hallelujah but the whole earth may be devastated by the emergency of horrible creatures from the dark places of the earth.

Snow Hunters has appeared on several Best Books of the Month list, and it is beautifully well written, tender, and memorable.  It is also so melancholy you may want to fall face down into a pan of brownies right after you've read it. Yohan, a prisoner of war after the Korean"conflict," elects to go to Brazil rather than be repatriated to the North. U.N. workers help him find passage and arrange work for him with a Japanese tailor, also an exile. Kiyoshi is a good man, kind and patient. As he goes about his work, Yohan meets a few others--Peixe, the gardener at a nearby church, and two street children, Santi, a young boy, and Bia, an older girl. Yohan feels drawn to become closer to these people, his friends, but is constrained by the horrors of his past--parents dead before he was sixteen, his conscription into the North Korean army, horror upon  horror after that, including the blinding and then the loss of his only friend. Snow Hunters is richly redolent of the beauty of the Brazilian coastline, of the gentle kindness of good people, and when Yohan is finally able ask someone to stay with him, and perhaps to love him, the novel finds its lovely conclusion. If you have ever wished everyone would just leave you alone, this book is a cautionary tale. No one would want to be as alone as Yohan is for way too long.

The Sound of Things Falling

The Sound of Things Falling
by Juan Gabriel Vasquez, translated from the Spanish by Anne McLean
Penguin, 2013. 270 pgs. Fiction

Lots of things--and people--fall in Juan Gabriel Vasquez's extraordinary new novel about the Colombian drug trade and those who were crushed and ruined by even a tangential relationship to it.
Antonio Yammara is a young law professor in Bogota when he becomes acquainted with Ricardo Laverde, a graying husk of a man who has recently been released from prison. As they play pool together, Ricardo reveals bits of his life: his past as a pilot, the existence of a wife living in the States, whom he hopes will come back home. Though Antonio steadfastly refuses to acknowledge that Ricardo is a friend, he cares enough for him that he tries to pull him back when two black-clad men on a motorcycle race towards them on the street:  Ricardo is killed, and Antonio is gravely wounded. When he begins to recover, Antonio relentlessly seeks to understand Ricardo's life as a means for saving his own. The Sound of Things Falling is a book charged with terrible ironies, and is memorably, beautifully well-written. Juan Gabriel Vasquez has almost instantly become a brilliant light in the firmament of Latin American literature, and this book's lyrical, unsettling text should stay with its readers a good long while.  Some graphic sex and language. Ursula Todd no sooner dies than she is reborn on a snowy day in February, 1910. Sometimes she dies at birth, during the London Blitz, or by suicide, yet her life is always reset to the beginning. Apart from the fact that she (occasionally) survives two world wars, her lives are generally unremarkable: she may marry, once has a child, frequently works for the civil service, and almost always has an affair with an admiral. As she accrues more and more lifetimes of experience, Ursula gradually becomes aware of her strange, never-ending life, which adds a depth and urgency to her attempts to find purpose.

Life After Life can feel like a writer’s experiment, a way for Atkinson to exhaust the possibilities of a character, but it is also a deeply affecting attempt to answer fundamental questions about life. If we were to live again and again, would we eventually get it right? And what does ‘right’ mean for a given individual? Atkinson doesn’t provide a straightforward answer to these problems, but her manner of fictionalizing philosophic and religious claims proves much more thought-provoking than an extracted quote or treatise ever could. Perfect for book clubs and reading groups.

The Down and Dirty Guide to Camping With Kids 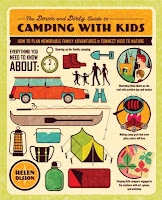 The Down and Dirty Guide to Camping With Kids: How to Plan Memorable Family Adventures & Connect Kids to Nature
By Helen Olsson
Roost Books, 2012. 254 pgs. Nonfiction

This is a great camping guide with a focus on caring for your kids in the wilderness.  It has sections on what gear you'll need, food to prepare (including recipes), hygiene and safety, as well as many ideas for crafts, games, and activities.  Each section comes with checklists so you can make sure you've remembered to pack everything, and the book is scattered with helpful "smart tips" that the author has picked up from experience - such as keeping a pair of sandals by the tent door for any midnight trips to the bathroom.  "Nobody, especially a six-year-old, wants to be tying laces in the dead of night."

I originally only intended to peruse this book and scan the sections that I was interested in.  But the author's friendly and playful voice lured me in until I ended up reading it from cover to cover, even laughing out loud a few times.  "You want the kitchen to be as far from the tent as possible (within reason), because you don't want your tent smelling like blueberry cobbler.  Bears love blueberry cobbler."  There is a lot of good insight and experience here specific to camping with kids that you won't get from a normal camping book, and it's fun to read to boot.