The Betrayal of the Blood Lily 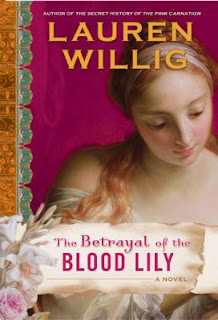 The Betrayal of the Blood Lily
By Lauren Willig
Dutton, 2010. 401 pages. Historical Fiction.

Book six in the Pink Carnation series that is part spy thriller, part historical fiction, part Regency romance. For the first time the story leaves Europe for colonial India where the Marigold, the latest in a long line of flower named French spies is causing trouble for Captain Alex Reid. Who would have thought that even more trouble than a French spy would be Lady Frederick Staines, nee Penelope Deveraux, who was last seen compromising herself in a London drawing room and is now married to the good-for-nothing Freddy and living in India to weather the scandal of a rushed marriage.

As Alex soon discovers, though born a lady Penelope refuses to act like a proper one. She shoots and rides like a man and worst of all refuses to be left at home to sit and cross-stitch as a lady should. Instead she gets embroiled in the very heart of a plot to bring the British Empire to its knees. Can Alex and Penelope work together to discover the identity of the Marigold before it is too late?

I had a hard time getting through this book and if how long it takes me to read a book is any judge of how well I like it, then I didn’t much care for this book. I quite enjoyed the first few books in Willig’s Pink Carnation series, but the last two or three have not held my interest as much. Still, it was enjoyable enough that I will keep reading the series.