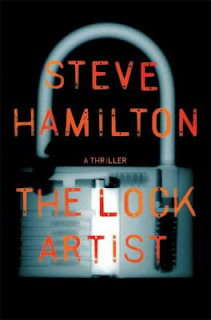 Michael can pick any lock and he never speaks, both traits incident to an horrific narrow escape from an unnamed trauma when he was nine. As his story begins he is in jail, and he tells how he got there in alternating chapters taking place in 1999 and 2000. When Mike is pressured by some kids from his high school football team into letting them into a rival player's home, he is the only one caught and sentenced to a summer's worth of work for the home's owner. There, while digging a hole for a swimming pool in the backyard, he meets Amelia and they fall in love. Things go south from there, as Amelia's father discharges Michael's debt by contracting his services out to some crooks to whom he owes lots of money. Amelia being at risk, Mike cannot refuse and comes to realize that his "unforgiveable" skills will always attract bad people, giving him scant hope for a decent life. Truth to tell, Michael is such an appealing character and the people he robs so deserving of losing their money that one can't help but enjoy his criminal enterprises though by and by his companions are so vile that he can only see one way out, and he takes it. The Lock Artist is an unusual novel of suspense, the mysteries rising from unlikely sources, but it is so beautifully well written and so deeply engaging that once picked up, it is difficult in the extreme to lay aside. (Prospective readers should be aware that some sections of the book contain foul language and graphic violence.)