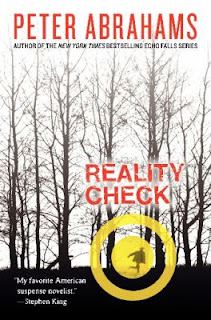 Cody is a poor kid. Clea is rich. When Clea's dad gets wind of their budding relationship, he sends Clea back east to a high-toned boarding school. Angry, Cody breaks things off and after a season-ending knee injury, quits the football team and drops out of school to work in a lumberyard. But when Clea goes missing during a horse ride in the woods, Cody drives to Vermont to find her. An icy landscape, a chilly reception from many who might be involved in the disappearance, and physical and verbal threats fail to deter Cody from his search until things take a deadly turn. Cody is a nuanced and sympathetic protagonist (though he seems a bit slow to figure things out towards the end). Abrahams' prose is atmospheric and suspenseful. Some bad language makes this book best-suited to older teens, but Cody's courage, determination, and increasing understanding of himself and others make this book more than just a compelling mystery, which it also is.

I must confess I put this down because of the language, etc., but I'm a fan of his other works like Down The Rabbit Hole.