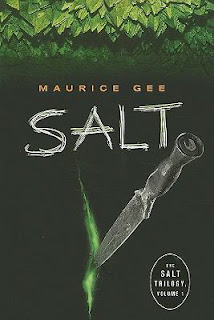 First in a project trilogy, Salt tells the parallel and then intersecting stories of Pearl, a child of privilege, and Hari, born in the Burrows to poverty and degradation, and their quest to save Hari's father from Deep Salt, a deadly mining operation from which no one has returned and whose yield is a substance of great power and destructive force. Tutored by Tealeaf, Pearl's former maid, both young people find their own source of power in their ability to control others with their minds. When Company, the brutal overlords of the land are brought down, but replaced with an equally wicked despot, and then with mob rule, Hari and Pearl make their escape to establish a household in a beautiful, sheltered place, and to raise their tiny daughter in peace. But will they be allowed to remain? Probably not, as we will discover in part two of the Salt trilogy, a thoughtful, sometimes preachy, but mostly engaging fantasy from New Zealand.