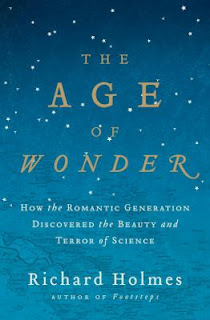 Age of Wonder: How the Romantic Generation Discovered the Beauty and Terror of Science
By Richard Holmes
Panteon Books, 2009. 552 pgs. Nonfiction

During the late 18th century, a handful of men and women dedicated their lives to exploring the mysteries of Earth and Space. This book tells the stories of these brilliant individuals and how their passion for knowledge, not to mention their fearlessness in pioneering new frontiers, led the world into the Romantic Age. A list of the key players described in Holmes’ book would include explorer Joseph Banks, astronomer William Herschel and his sister Caroline, and the chemist Humphry Davies.

Scrupulously researched, Age of Wonder is a fascinating journey through this amazing era of discovery. Holmes does an excellent job of recreating the excitement that new discoveries created throughout the world of intellectuals. I admit that I didn’t find all the chapters equally interesting; but I was never tempted to abandon the book, either. This is definitely recommended reading for anyone interested in this era’s literature as well as history and science, since major poets and writers of the age play minor, but important, roles in the narrative.