The Watsons Go to Birminghman-1963 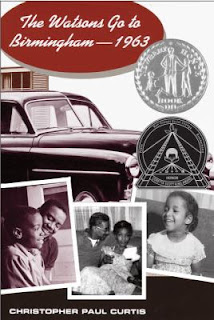 Ten-year-old Kenny and his family, the Weird Watsons, live in Flint, Michigan, where Kenny's older brother By keeps acting up, his Momma and Dad try to discipline him, and his sisters Joetta tries to intervene to protect him. By's bad behavior prompts Momma and Dad's decision to take the family to Birmingham, where they plan to leave By with his grandma until he learns to behave.

This hilarious book will have readers laughing but also get you thinking. Although the story is mostly about Kenny's family and takes place in Michigan, the poignant moments of their time in Birmingham and their fictionalized experience with the 16th Street Church bombing will help readers empathize with the families of the little girls who died in the bombing and could spark interest in learning about the bombing as well as the Civil Rights Movement. This is a must read!