Daughter of the Forest 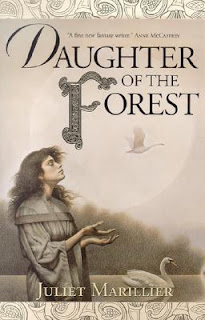 Sorcha is the seventh child and only daughter of Lord Colum of Sevenwaters. Her mother died when she was just an infant but her brothers love and protect Sorcha and are determined that she know only happiness. Soon life changes for them all when their father marries an evil enchantress that casts a horrible spell on the brothers but not before they are able to warn Sorcha to flee. Now it is up to her to undo the spell. As she sets out on her quest she must remain silent or she will lose her brothers forever.

Sorcha is an wonderful character that has to endure much heartache in her young life. I would use some caution in recommending this book to all readers because of a rape that happens somewhat early in the book. I really enjoyed the overall story and the idea that love is the strongest magic of all.