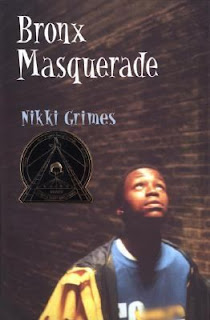 A class of students in the Bronx has been studying the Harlem Renaissance; inspired by the topics, many students begin writing poetry of their own and presenting them in their class on Open Mike Fridays. As they share their poetry with each other, they begin to see that there's more to their classmates--and to themselves--than they previously thought.

Bronx Masquerade examines and dispels stereotypes and invites readers to consider what it means to exist in a multicultural society. Through the poems the characters share on “Open Mike Fridays,” readers see what incorrect, preconceived notions people have and how those ideas change as the characters share their poems with each other. Although readers only get glimpses of each character, the lifestyles are realistic but also represent a diverse range of backgrounds and speech patterns. As the characters come to discover their identities while also discovering their strength within themselves, readers can be inspired to take another look at themselves and those around them.