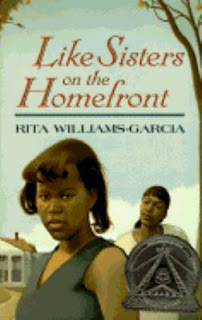 Like Sisters on the Homefront
By Rita Williams-Garcia
Lodestar Books, 1995. 165 pgs. Young Adult

Fourteen-year-old Gayle's mother has had enough. Already the mother of one child, Gayle is now pregnant again, so her mother forces her to end her pregnancy and then sends her down south to live with relatives she doesn't even know: Uncle Luther, a preacher who has no patience for Gayle, "Miss Auntie," who puts Gayle to work around the house, and her cousin Constance, who still wears knee socks at age sixteen. Gayle is miserable and just wants to get back to the City, but as she's forced to do some growing up, she also finds out what it means to be family.

This book portrays an interesting look at family dynamics. Gayle isn't the most engaging character I've ever read about--at times, she is both abrasive and vulgar--but I did enjoy the process of watching her learn and grow.