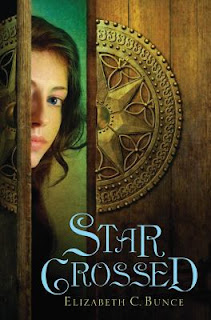 Foiled at their latest attempt at thievery, a wounded Tegen tells Digger, his partner, to run from the Greenmen, who are the tools of the dreaded Inquisition, and so she does. She falls in with a group of young noble men and women who offer her a place on their boat as they sail out of the city of Gerse. Emboldened by the alias Digger has given them, she becomes Celyn Contrare, lady-in-waiting to one of the young women, Meri, who has a special secret of her own. Digger and Meri travel with Meri’s family to their new home in the mountains where Digger’s talents as a thief serve her and another newcomer well. Digger discovers that everyone visiting the mountain home has secrets tied to each other and the Inquisition and she must decide whose side she is on.

Overall, this is a great start to what will, hopefully, be a new series. Digger is a strong heroine (somewhat akin to Katsa and Katniss) who thinks for herself and is not overly whiny or petulant. Most of the supporting characters are also fully realized and the prince, in particular, is quite engaging. Interesting twists and turns abound, although they are not as well done as in Megan Whalen Turner's Attolia series. My one quibble is that the background information on this world and its religious history are not fully detailed, and while the reader picks up some clues, it was still confusing as to what gods were acceptable and why others were not.