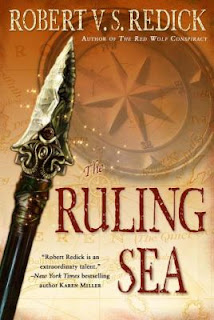 High Seas Adventure and Fantasy rarely come together in one book. Add in plot-twists, double crosses, and evil sorcerers, and there is enough intrigue to make anyone happy. This is the sequel to The Red Wolf Conspiracy and continues the story where the first book left off.

Thasha and Pazel’s small band of conspirators have thwarted plans to bring two empires back to war, but it has left them exposed to the sorcerer Arunas and his machinations. They must now use their limited resources to find a way to stop to Arunas from using the Nilstone which is so powerful the wielder could subject the entire world to his will. All of this is going on while the giant ship Chathrand navigates the Ruling Sea, a sea so vast is has not been crossed in hundreds of years.

Overall, I enjoyed this book. However, I think it could easily have been a 100 pages shorter and sometimes the characters were a bit annoying.