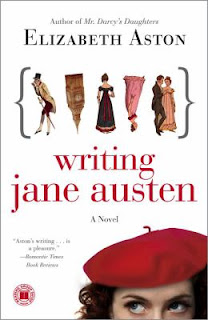 A missing manuscript, written in Jane Austen’s own hand, has been found. It contains the first chapter of an unfinished novel and Georgina’s agent wants her to finish it. Sounds like the dream commission for a rising author, but several obstacles loom before her. First, she has been suffering from a case of writer’s block since publishing her first critically acclaimed book. Second, she is only being given a fraction of the time necessary to write such a novel. And finally, she has never actually read any of Austen’s books. Despite these reasons to run from the project, financial obligations and a group of supportive friends convince Georgina to take it on anyway.

Aston is known for her Pride & Prejudice sequels starting with Mr. Darcy’s Daughters, which I loved. This book, I did not love. It actually reminded me a bit of Aston’s last book which seemed to be all build-up and no pay off. The romantic story line was completely unsatisfying and I didn’t feel a connection to any of the characters. Add to that the nervous feeling I was plagued with as Georgina continually procrastinates writing, despite deadlines quickly approaching, and you have an idea of the less than stellar experience I had while reading this book.