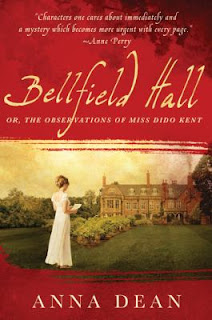 As a young, maiden aunt, Miss Dido Kent is always at the beck and call of any family crisis. Thus, she's not surprised that a frantic summoning to "come immediately" arrives from her favorite niece, Charlotte. It appears that Charlotte had been thoroughly enjoying an English country house party when she was mysteriously abandoned by her wealthy and well-connected fiancée and Charlotte needs her dear aunt's comfort and level-head to sustain her during this catastrophe. But a disappearing fiancée isn't the only problem Miss Kent encounters when she arrives at Bellfield Hall and an unidentified dead woman in the shrubbery only makes the fiancee's absence more suspicious.
Miss Dido begs Charlotte to denounce the irascible man and get herself from Bellfield Hall as soon as possible, but Charlotte's obstinate loyalty to a man she barely knows forces Miss Dido to play the detective and find out just who the real murderer might be. Complications ensue when a charming widower and various family members become prime suspects in the case, but Miss Dido resolves not to let these disconcerting variables keep her from discovering the truth. Bellfield Hall reads like a cross between Agatha Christie and Jane Austen and admirers of both excellent writers should find themselves fairly satisfied.
DAP