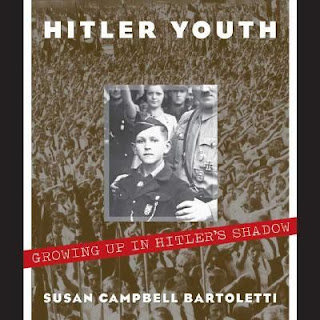 Approximately 7 million German children had joined the Hitler Youth organization by the time World War II broke out. Boys and girls alike were indoctrinated with Nazi ideals, including a love for the Fatherland, a hatred of Jews, and a determination to sacrifice all for their homeland. Many of the boys fought in battles for their country, while girls did various work projects and were taught they should provide Germany with healthy children to continue their goals of domination.

Susan Campbell Bartoletti's Newbery Honor book allows readers to have a deeper understanding of what German youth were like by parring historical information with accounts from German youth themselves--both those who wholeheartedly accepted Nazism and those who came to realize that they didn't believe Hitler was right and actually worked to oppose him. Well-written and informative, this is a great resource for understanding more about why German citizens embraced Nazism.