No Way Down: Life and Death on K2 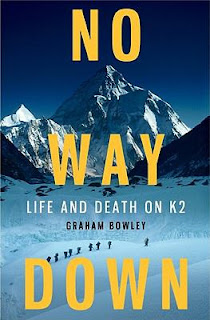 No Way Down: Life and Death on K2
by Graham Bowley
HarperCollins, 2010. 253 pgs. Nonfiction

Graham Bowley’s “No Way Down: Life and Death on K2” is, alas, much more about death than life. When eleven climbers died on K2 on August 1 and 2, 2008, Bowley, a reporter for the New York Times, was asked by his editor to write up the disaster; his first thought was “why should we care?” Like many others, Bowley felt not so much compassion for those who put themselves at risk and their families to grief by wantonly placing themselves in harm’s way. But the overwhelming response to his front-page article made him think there was more to this story and he set out to discover what. The resulting narrative is frightening, suspenseful, and agonizingly prescient, as the tension between what the reader knows and what the climbers don’t makes this a compelling, heartbreaking book from the edges of human endeavor.