Airs above the Ground 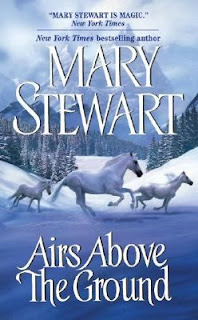 Airs above the Ground
by Mary Stewart
HarperTorch, 2004. 373 pgs. Mystery

Vanessa March's husband is supposed to be working in Sweden, so when he shows up on a newsreel of circus fire in Vienna--alongside a pretty young woman--Vanessa decides to investigate. Meeting up with the circus is easy enough, but soon Vanessa finds herself caught up in more than just the mystery of her husband's whereabouts, she also becomes entangled in the mysteries of the circus.

Originally published in 1965, this book is a gentle, clean read. Although there are mysteries to be solved, there is little suspense and not much to be afraid of, either. There is fun dialogue and some information about Austria's famous lippenzers horses. This is a good mystery for those who don't like being scared out of their wits.