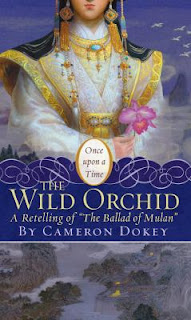 Mulan was destined to be different, since parents married for love rather than having an arranged marriage. However, when her mother died after giving birth, Mulan's heartbroken father never came home to see his daughter. Left in the care of servants and with only a neighbor boy for a friend, Mulan became good at not only womanly tasks, such as sewing, but things most girls would never dream of--archery, reading and writing, and horseback riding. When her long-estranged father finally returns home, he and Mulan have to adjust to each other, but soon, a summons arrives from the emperor: every household in China must send a man to fight against the Huns. Mulan is determined to protect her family, so she disguises herself as a boy and joins the army--quickly becoming friends with Prince Jian.

This is the first retelling of Mulan that I've ever read, and it leaves me with mixed feelings. I enjoy the story of Mulan (who doesn't like a girl who can hold her own with the boys?), but I felt like the writing was somewhat choppy and the style was a strange mix of a beautiful Eastern fairy tale with elements of Westernization thrown in. It's a quick read and still a good one for fans of fairy tale retellings, but some readers will find it less than fulfilling