The Devil and Sherlock Holmes 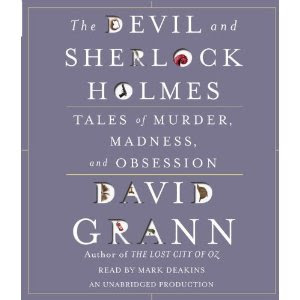 The Devil and Sherlock Holmes: Tales of Murder, Madness and Obsession
By David Grann
Books on Tape, 2010. 11 discs, Nonfiction

Truth is stranger than fiction. If the old adage can be trusted, then David Grann has compiled some of the more incredible stories which lay claim to that principle. Grann is a reporter and all his tales contain an aura of mystery that Sherlock Holmes could only dream of solving; however, that most revered detective figures only in the first anecdote and fans will have to be content with such as it is. (I, myself was hoping for more.) Yet, the story of an obsessed Sherlock Holmes fan—who just might have committed suicide in the hopes that it would be mistaken as a murder—is indeed worthy of Holmesian detection. Half the fun is using your own detecting skills to solve the puzzle in order to decide which it really was.

Moving on, Grann presents the reader (or listener as may be) with more tales of the unusual and macabre. He offers up the strange case of a Polish murder, which may or may not have been committed by an eccentric philosopher who published a book with remarkable similarities to the crime. Another tale offers the bizarre story of a chameleon-like Frenchman who posed over and over again as an orphaned teenage boy with the hopes of being loved. Thus, if the bizarre world of true crime suits your summer reading fancy then step into a world where the possibilities are often grisly.