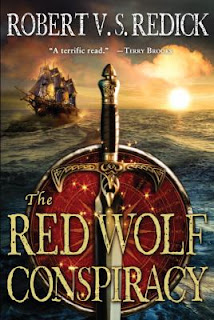 This thoroughly enjoyable mix of high seas adventure, fantasy, and intrigue is written by first-time novelist, Robert V.S. Redick. The massive Chathrand is the last ship of its kind and the pride of the Arquali Empire. Built 600 years ago, it dwarfs any boat on the seas today. The Chathrand is about to depart on a mission of high importance. The ship and its crew are to deliver Thasha, the daughter of retired Admiral Isiq, to the Mizithran Empire to be married in a bid for peace between the two empires. But no one aboard seems sure whether this is a true attempt by the two empires to bind them together or merely a ploy to start an even more deadly game.

Pazel Pashkindle is a lowly tarboy aboard the Chathrand, but he has a unique talent brought on by magic that allows him to instantly learn any language when suffering from one of his “mind-fits.” As he is the only person aboard who can speak Zithrini, this puts him in the path of Thasha and the intrigue surrounding her. Soon Thasha and Pazel are working together to unravel the secrets that everyone seems to be hiding.

The Red Wolf Conspiracy has what is at first a confusing mix of characters. But once the story really gets going, it becomes quite the page-turner. This spirited and exciting story brings to mind historical adventures such as The Count of Monte Cristo and Master and Commander, but for more historical fantasy try His Majesty’s Dragon by Naomi Novik.