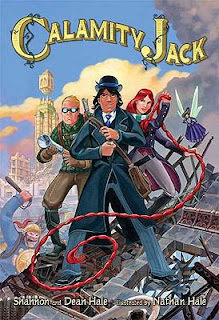 In this sequel to Rapunzel's Revenge, Jack takes center stage. He and Rapunzel head back to the city so Jack can try to repair the damage he's done there previously. When they discover Jack's enemy Blunderboar is in charge of the city, which is overrun with giants and huge ants, they have to set things right before it's too late.

This graphic novel is a quick read with action and just a touch of romance. It gives some background information about Jack (and his beanstalk) but also lets Jack and Rapunzel have an exciting new adventure together. It also has some good character development, as Jack is struggling to figure out who he is and how to move forward after an unsavory past.