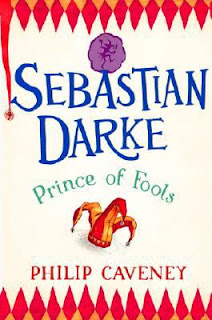 Sebastian is following in his dead father’s footsteps, training to be a jester; the only problem is that he is not funny. With money running out at home, he decides that he must find an appointment with a king. He, along with his trusty talking buffalope Max, head off to Keladon. Along the way they meet up with Captain Cornelius Drummel, a warrior short in stature but big in courage, who is looking for a post in the Keladon army. Traveling together they rescue the princess Kerin of Keladon from an attack from the Brigands. Being heroes, Sebastian and Cornelius think they have found favor with the king, or so they thought.

I first picked up this book to listen to because I was intrigued with the narrator - Maxwell Caulfield (yes, that Maxwell Caulfield). I was not disappointed and in fact hope that Caulfield will be narrating more books in the future.

This is a fun adventure story with a little fantasy and lots of humor. I really enjoyed it and look forward to listening to its sequel when it comes out.