Amazing Tales for Making Men out of Boys 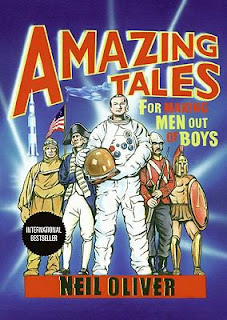 Where’s all the Men?!? It’s not just a cry from the coeds in Provo demanding an improvement in the lamentable 2 to 1 ratio. Neil Oliver also yearns to travel back to a time when boys were taught to be men, a time when heroes existed. As an archaeologist, he’s passionate about history and he tells a mean story too. He’s lovingly compiled a selection of tales that inspire and he’s recreated accounts of courage, adventure and honorable sacrifice. The stories include famous but sometimes little studied events such as The Demons of Camerone, The Charge of the Light Brigade and Thermopylae. Your boys will meet heroes such as Lord Nelson from the Battle of Trafalgar, Admiral Scott and his explorations in the Arctic and the moonwalkers of Apollo 13. It’s a lifetime of adventure in one readable volume.

Oliver does recommend his collection strictly for the masculine sex, lamenting his wife’s poor opinion of one story by saying “but she’s a girl and girls don’t understand.” Now that sounds like a challenge to me. Promising much, the book doesn’t come with a money back guarantee, but as an international bestseller its popularity can speak for itself.