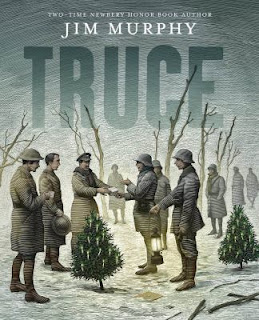 When World War I began in July 1914, many people thought it would be over in a matter of weeks. However, weeks quickly turned into months as both sides turned to trench warfare, settling into mud and slime. As Christmas approached, commanding officers demanded there be a continuous push at war, but thousands of men in the trenches along the western front had other ideas. Truces were established between Germans and Allies, and many spent Christmas Eve together in No Man's Land, exchanging presents, sharing food, and taking pictures.

Murphy does a great job of providing background information about what led to World War I and the expectations of both sides. His text is easy to understand and illustrations and photographs add greatly to the book. Murphy also helps the reader wonder, as did Winston Churchill when he wrote to his wife in 1914, "What would happen, I wonder, if the armies suddenly and simultaneously went on strike and said some other method must be found of settling the dispute?" Is there another way to solve conflicts? Murphy's book is a great resource for thinking about some of the causes for war and what would happen if people looked for other solutions.