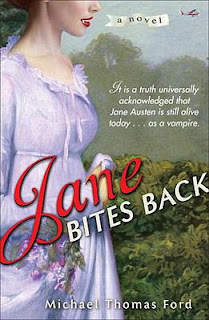 Jane Austen is a vampire. She has changed her name and runs a small bookstore in upstate New York. In general, she is content selling books including numerous copies of her now classic works, despite the fact that she receives no royalties. One nagging discouragement is her inability to publish her new(ish) manuscript after decades of trying. Her life, or afterlife, is about to be upended when a dark man from her past appears and threatens those she has grown to care for.

This was fun to read. There was something charmingly ironic about an Austen spin-off consistently mocking the Austen-mania dominating a good portion of the publishing world. But beyond that you will find interesting, though perhaps shallow, characters and a whole bunch of hilarious literary references. Not a squeaky clean choice, but definitely an entertaining one.