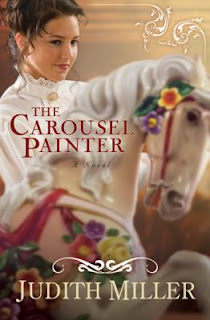 Carrington Brouwer, an American, lives in Paris with her father while he teaches art lessons to young debutantes. When Carrington’s father dies she has nowhere to go and relies on the generosity of a previous student, Augusta Galloway. Augusta invites Carrington to live with her in Ohio. However, when Carrington arrives it is clear Augusta’s highbrow mother is furious with the plan. Augusta’s father owns a factory that produces carousel horses. He agrees to let Carrington work there as a painter, even though she will be the only woman working at the factory. Carrington moves to a different part of town from the Galloways and lives in a boarding house. While struggling to support herself she also tries to impress Josef Kaestner, the young German manager of the factory.

It is clear Judith Miller did detailed research about the time period before she wrote this Christian historical romance that is set during the year of 1890. The most interesting part of the novel is reading about the class distinctions of the time and comparing them to our own society now. Aside from the historical atmosphere I found the novel to be an unexceptional example of the genre. There is an formulaic evil suitor and inferior crime sub-plot. Instead of having Biblical teachings be a part of the natural ebb and flow of plot and characterization they come across as klutzy. Readers might try Tamera Alexander or Deeanne Gist instead.