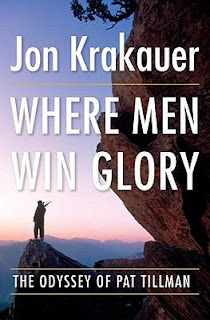 Pat Tillman was a rising star in the NFL when two planes flew into the World Trade Center on September 11, 2001. This fiercely competitive and disciplined young man was struck with an undeniable desire to help fight the war on terror and do his part to make the world a safer place for those he loved. This desire motivated him to walk away from his new bride and a $3.6 million dollar football contract to join the United States Army. Two years later he was killed by friendly fire while fighting in a war he did not believe in.

While this book is about the personal journey of one young man, it is also a highly readable narrative of the events and politics that have resulted in the current situation in Iraq and Afghanistan. Krakauer’s high regard for Pat Tillman is obvious throughout the book, as is his lack of respect for the Bush Administration which used Tillman’s celebrity, when he enlisted as well as when he tragically died, to their own advantage despite Tillman’s expressed desire that they not.