Stories from the Life of Porter Rockwell 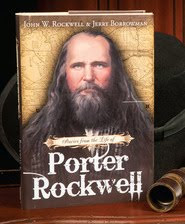 If you were told your very life would be preserved if you never cut your hair, would you comply with this odd stipulation? Well, if you lived in the Wild West, had a high price on your head and your name was Porter Rockwell, you just might think it wise. Especially if the man doing the telling was none other than Joseph Smith, first prophet and president of the Church of Jesus Christ of Latter-day Saints. Rockwell is one of the most notorious figures in early church history and the stories told about him run far and wide—stories both stirring and sobering. Porter’s great-great-grandson, along with the help of LDS author Jerry Borrowman, is here to tell all the great stories known about Rockwell and set to rest many of the unpleasant rumors. They don’t aim to write a definitive biography, just touch on the most thrilling aspects of Rockwell’s infamous life. You’ll read about Rockwell’s excruciating time in jail, his saloon business and his appointment as Joseph Smith’s bodyguard. If you want to know the real story behind Rockwell’s involvement with the Danites, you'll find that out too.

Admittedly, it’s one of the most slap-bang adventure stories you’ll ever read and the best part is, they claim it's all true. Perhaps the treatment is a bit too shallow in places, but it does serve as an inspirational tale of this man’s devotion to his faith. Mostly though, it’s a heart-wrenching tale of Rockwell’s complete loyalty to what he terms the “only friend he ever had”—Joseph Smith. If this is friendship, to never betray and swear to always protect, then let every man or woman have such a friend as Porter Rockwell.