Wisenheimer: A Childhood Subject to Debate 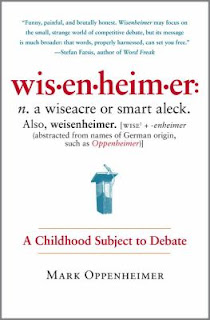 The beginning and ending of Oppenheimer's memoir are deeply engaging. The middle, not so much. Mark Oppenheimer was a kid who, from the age of two, couldn't stop talking. His mother used to call to beg his father to come home because she couldn't stand it anymore. His teachers didn't like him much either--he was always arguing with them or correcting their English usage. But at age 12 he discovered debate and the life-changing concept that talking could lead to glory. Oppenheimer's account of his rapid rise in the debate community comes with enlightening and interesting explanations of the (many!) different types of debate and competitive public speaking one might engage in, and what makes someone good at that sort of thing. The book bogs when Oppenheimer reaches the end of Prep School and then goes on to Yale where what interests him--drinking and various girlfriends, basically--gets tedious for the reader. An unbecoming condescension towards those not of his privileged background also colors the text. In the end, Oppenheimer chooses to become a journalist rather than the obvious career choices for a public speaker (lawyer or politician), and his particular interest in the history of religion takes him and his readers in an unexpected and interesting direction. An unusual book, not altogether satisfying, but with very bright spots as well.