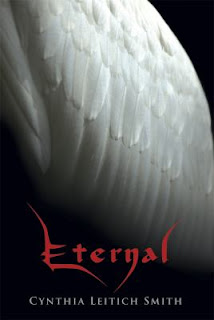 Miranda is a fairly normal high-schooler until, in an attempt to save her life, her guardian angel Zachary puts her in the path of a vampire. As a newly-turned vampire princess, Miranda is supposed to reject her former life and embrace all that her new "father," the reigning Dracula, decrees. When Zachary, in somewhat human form, having been demoted by Archangel Michael, accepts a position as Miranda's personal assistant, he has to try to save the unsaveable--the undead.

Eternal is a somewhat darker story than other vampire stories I've read, and Zachary's very human emotions and passions certainly differ from the typical idea of an angel. I didn't find either Miranda or Zachary to be a truly engaging character, but Zachary's task of saving his former charge and regaining his status as an angel do make for an interesting story of redemption and who (or what) is redeemable.