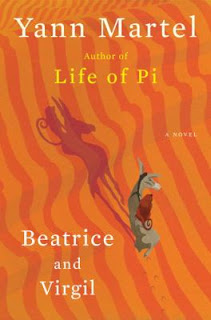 While taxidermy isn’t a career choice for many, it figures strongly in celebrated author Yann Martel’s latest novel. After his brilliant and much translated Life of Pi, Martel hands us the story of a raw-boned, introverted and enigmatic taxidermist. The man is a foil for the book’s protagonist, a celebrated author with a brilliant novel translated into scores of foreign languages and famous for its focus on wild animals. Familiar? The author is Henry, who has been attempting to write a fictional account of the Holocaust but can’t seem to bring any publishers on board. It’s at that point he receives an odd letter of help from a taxidermist writing a bizarre play about two animals, a howler monkey and a donkey—Beatrice and Virgil—or the two people Dante encounters in his journey through heaven and hell. While Henry is put off by the taxidermist’s discomfiting manner, he can’t seem to stop visiting the amazing shop of dead things or reading this intriguing, yet highly alarming play.

Beatrice and Virgil is a story about horrors -- the horror of murder and the horror of the human conscience. It’s a difficult read, due somewhat to its original and modernist nature but mostly because of its disconcerting qualities. However, there are several beautiful passages on the nature of art and history. Opinion? It works, but it’s perhaps one of most disturbing and the unique stories of the Holocaust up to the present. As with Life of Pi, the story seems to be headed decidedly in one direction when the twist at the end comes slamming into you out of nowhere -- until you realize it’s been staring you in the face the entire time.