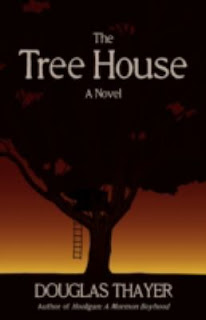 You might think that growing up in Provo, Utah during the mid 1900’s would provide an idyllic childhood. However, Harris Thatcher’s life is anything but idyllic. He begins life with several amenities: a nice Mormon mother, an inactive, but adventurous and Scout loving father, fun-loving siblings and of course--his beloved tree house. But then Harris encounters an overwhelming number of obstacles, which all begin with the death of his father at an early age. And that is only the beginning of the catastrophe that becomes Harris’ life. His work as a missionary in post WWII Germany is a merely one trial. But perhaps the most difficult experience forced on Harris is the complexity of keeping his faith during the travesties of the Korean War. Although he plugs on, the “whys” of life are interminably present.

Denizens of Provo and especially all old-time residents should find the book interesting from a historical viewpoint. (Anyone remember the Starlight Cafe?) Members of Thayer’s faith should appreciate it from a religious perspective--there is much truth in Harris’ mission experiences and it’s not all gloss. And for those who experienced the Korean War, the book should feel all too real. Thayer is a local writer and creative writing professor at BYU. Former colleagues give the book high praise, believing it’s some of the best in Mormon fiction on the market today. Thayer’s prose is certainly unique, but some might find it a barrier. His style follows a simple, repetitive pattern which hints at stream-of-consciousness and it’s an experiment you’ll have to try for yourself.