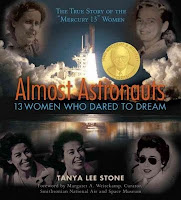 After the U.S.S.R. launched Sputnik, the U.S. responded by forming N.A.S.A. and recruiting astronauts. Initially, all of these astronauts were men, but then some people began wondering if women were just as capable as men of being astronauts. Since much of the U.S. thought women had no place in space, others set out to prove it, and thirteen women were given and passed the same tests (or, in some cases, even more rigorous tests) administered to male astronaut hopefuls. In many cases, they not only performed as well but better than their male counterparts. However, as Stone explains, there was opposition from male astronauts, politicians, and even a woman who was disgruntled after not being invited to participate in the testing. And so, for many years, women were not allowed to be astronauts.

I've had this book of my "to read" list for a long time, and I'm glad I finally picked it up. Although I found it hard to keep the thirteen women straight, their collective story, their struggle and their rejection but their continued interest in space, was fascinating. For anyone looking to see the political agendas that prohibit women from excelling, anyone looking for a female role model, or anyone interested in space, this book is a great choice.