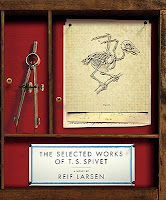 Twelve year old T. S. Spivet is a cartographer, illustrator, and first-rate scientist who lives with his father, mother, sister Gracie (and the sorrow of his brother Layton's death) on the Coppertop Ranch just north of Divide, Montana. The Smithsonian knows only the scientific and Montana parts of Tecumseh Sparrow's life when they offer him the prestigious Baird award and fellowship for the popular advancement of science. Knowing they don't know how young he is, T. S. at first declines but changes his mind and hops a freight for the nation's capital where he will be expected to make an acceptance speech to the learned body and assume the duties of a year-long fellowship. T. S.'s goal in life is to map and otherwise diagram the known and unknown worlds and his story is accompanied by side notes, footnotes, and illustrations of everything from a Map of North Dakota Showing Ecoregions, Surface Water, and Locations of Twenty-Six McDonald's to Patterns of Cross Talk at his family's dinner table, not to mention a graph of Synchrony in Montana Photinus pyralis. T. S.'s overland journey on a flatcar in a Winnebago named Valero gives him a chance to know himself, his roots, and the space-time continuum better (as the whole train makes a brief detour into one of several unmapped wormholes in the Midwest). Funny, touching, mind-bending, and heartfelt, The Selected Works of T. S. Spivet, though a bit boggy and uneven here and there, is a delight, with a young hero you are unlikely ever to forget.