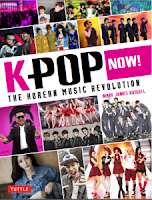 There are a wide variety of factors that have contributed to the development and growing popularity of K-pop, or Korean pop music. Russell provides a broad overview that includes historical and cultural influences, as well as describing what makes the industry unique and different from Western music. From there, Russell provides overviews of some of the current hottest artists in boy groups, girl groups, and solo acts, then briefly ventures onto the future of k-pop and what to expect when traveling to South Korea.

Russell’s enthusiasm for this topic is clear, and this book touched on all the parts I would expect. It actually felt like a cross between K-Pop: Korea's Musical Explosion, and the Stars of K-pop series, but better, much better. While most of the book is very upbeat and light hearted, I was especially happy to see the darker side of the industry mentioned, the hard work, long contracts, and sometimes dishonest producers and managers. For those interested in K-pop, this book hits all the right notes and I would highly recommend it.