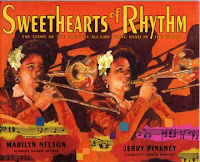 Award-winning poet Marilyn Nelson combines with award-winning illustrator Jerry Pinkney to create a colorful book about the International Sweethearts of Rhythm, an all-girl band popular in the swing era of the early 1940s. Told through the voices of the instruments formerly owned by the band members, readers get a glimpse of the many layers of the era--World War II, Jim Crow laws, women filling new roles as men headed off to war, and more. The book is interesting not only for its story but also for Nelson's skill in crafting poetry and Pinkney's skill in creating artwork to compliment it.