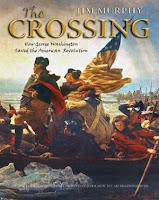 Jim Murphy describes the circumstances leading up to Washington's fateful crossing of the Delaware, explaining how the Continental Army, after their success in Lexington, Concord, and Boston, soon lost ground in New York. With men deserting right and left and the Continental Congress discussing whether Washington should be relieved of his command, the general organized a secret attack on the Hessian soldiers stationed in Trenton , crossing the Delaware in the middle of the night. That fateful decision renewed morale and kept the Revolutionary War going when it had only shortly before seemed more likely to fail.

I liked this clear, concise account of the crossing of the Delaware. It's one of those things that has been immortalized in paintings and whatnot, but I was a little fuzzy on the details, but this book provided a great refresher. Another great resource from Jim Murphy.