Locked Up: A History of the U.S. Prison System 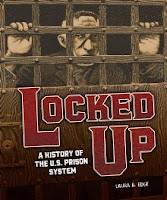 Locked Up: A History of the U.S. Prison System
By Laura B. Edge
Twenty-First Century Books, 2009. 112 pgs. Young Adult Nonfiction

I wasn't sure what to expect from a book about the U.S. prison system, but this was actually a really interesting read. Edge begins with colonial prisons and moves forward to the present day, describing prison conditions, attitudes toward prisons (such as whether they should be mainly for punishment or reformation), and movements and regulations, such as the changes in the death penalty and the move to having separate prisons for women and juveniles. I think this was a great introduction to the prison system and my interest is peaked now and I'd like to learn more about the U.S. prison system, as well as some of the famous prisons mentioned in the book.