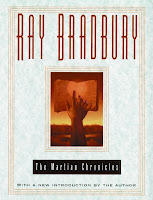 Man comes to Mars expecting human responses and an Earth-like environment and culture. Instead, the Martians are completely uninterested in the humans’ great achievement of space travel and end up killing the first few expeditions for trivial reasons. However man persists and conquers Mars, imposing their own beliefs on the planet rather than opening their eyes to learn from what is already there. This book is a collection of rather unrelated short stories that collectively tell of man’s shortcomings as they colonize the red planet.

Honestly this book wasn’t what I was expecting. The short stories are quite disjointed from each other, which threw me off in the beginning. Then I realized that together they tell a broader story than they do individually, and it has more to do with the shortcomings and flaws of mankind than it does with Mars itself. Once I realized I was getting a bigger picture story, it was hard to put the book down! I’d recommend this one to someone looking for classics or societal commentary.