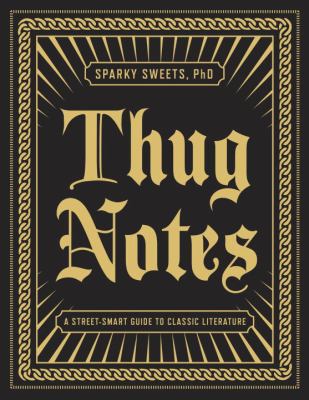 Based on the YouTube channel Thug Notes, this book covers sixteen classics of literature in an un-classical way. Think Cliff Notes or SparkNotes with street cred. Each classic is covered in seven topics: A quick introduction of why the book is important (called So What’s the Deal?); a rundown of the cast of characters (Homies); followed by a fairly good, quick summary of the plot (What Went Down). Popular themes, images, and symbols are also covered, followed by popular quotes (Say What?) from both the book and from other famous authors (Shout-Outs) who have covered the same topics, all summarized and worded to make sense to a thug. Images throughout the book help drive the message home.

If you’re wondering how the marriage of classic literature and thug works, I’ll let this book speak for itself:

“To me, a thug is somebody who buck da system; who stand up and try to make they imprint on da world. A thug live how they wanna live, and do what they wanna do, even in da face of a world tellin’ ‘em they gotta act a certain way. Most of da novels and authors in this book you holdin’ ain’t no different. Some of da best works of lit can be thought of as expressions of rebellion or great dissatisfaction wit’ da world . . . and to me, plenty of rappers singin’ they heart out ‘bout da same thangs.”

While I personally see this book as more of a comedic book about literature than a helpful study guide, this book does give a good summary of each of the classics covered. Fans of Texts from Jane Eyre and other comedic literary pieces will probably also enjoy Thug Notes. Be forewarned,“thug” language is pervasive throughout, and includes some swearing.