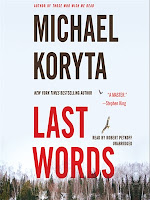 Mark Novak is devastated when his wife is murdered, and even more so because his last words to her had been "don't embarrass me . . . ." His work at a death row defense firm where he and his wife had been working a case together has tanked, particularly when he seeks information about her murdered by extralegal means. A trip to Indiana to check out a cold case of a girl murdered in a mine is his last chance. The weird thing is, the guy suspected of the killing is the one asking for an investigation. Hostile townspeople, things altogether not being what they at first seem, and a seriously weird suspect, Ridley Barnes, lead Novak and the reader on wild goose chases, profoundly dangerous encounters, and into the black of the cave itself. Koryta is master of both horror and detective genres and his latest will keep you guessing until the end.