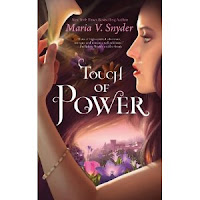 How could a person with the ability to magically heal someone ever be hunted down and killed for that very skill? Healers like Avry of Kazan were accused of spreading a devastating plague and then refusing to heal anyone with it. What the people don’t know is that a healer will die if they try to heal a plague victim.

Now two years later, Avry is exhausted from being on the run. When she is finally caught and sentenced to death, her salvation comes in the form of a band of men who help her escape only to demand that she heal their prince from the plague. Avry must decide if healing this prince is worth giving up her own life.

Maria Snyder’s first book in a new series has all the same elements her other books contain; a strong female lead that makes decisions for herself, a group of fellow adventurers who keep the story light, and a kingdom in trouble. In my opinion the similarities actually ruined some of my enjoyment of the book. I prefer to read something new, not just the same story with slightly different characters in a new setting.

I LOVE Snyder's stuff! It is too bad this new series has some of the same elements as her other books. I would really like to see something new from Snyder.