Your Happily Ever After 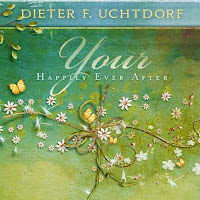 Your Happily Ever After
By Dieter F. Uchtdorf
Deseret Book, 2011. 57 pgs. Nonfiction

Sometimes we need a reminder that life was never all sunshine and roses for fairy-tale princesses. Before the true love's kisses and happily ever afters, there came once upon a times of poisoned apples, spindle pricks, and impossible tasks.

Speaking to the princesses of our Heavenly King, President Dieter F. Uchtdorf compares their challenges to those faced by famous fairy-tale heroines. Recounting Belle's captivity, Cinderella's servitude, and the sacrifices of the miller's daughter, President Uchtdorf emphasizes that each princess had to overcome adversity before she reached her happily ever after.

This book is aimed at young women and encourages them to work toward their own happily ever after, while realizing that opposition is part of daily life. A sweet reminder to look at the bigger picture and have faith in Heavenly Father’s plan for each of His children.